You are here: Home » The B' Creative Directory

There is a Mobile Optimized version of this page (AMP). Open Mobile Version.

One of my first big projects at Quantum Web Solutions was to construct a social network system that was intended for this client but could be easily adapted for future projects. I was told before starting the project to use an existing project which was called "GoldArena". However I quickly discovered that this system was very poorly coded, had huge vulnerabilities, was largely incomplete and was definitely not adaptable for the requirements they had, and as such I suggested that I just build a new system from scratch as this would be quicker than modifying the system provided.

Luckily they agreed and so I built our first in house social networking engine, thebcreative was the first of 3 sites that were constructed (unfortunately only 2 made it live, the third was axed upon my departure from the company).

I was handed a rough design for the site from which to work from, so Photoshop skills were required for refining the design as well as a keen eye to detail so that it matched the design as closely as possible but also improved upon it where required, I also had to design and layout pages such as the account areas, search pages and etc as these were not designed (I only really had the homepage and an idea of how the profile page would look, however in the end the profile page ended up being far different).

The system allows for average people to register to the website and set-up their own entertainer profile, this profile contains all their experience, strengths and weakness and also integrates their facebook profile if they choose, their profile is assigned a category of their choosing and the user can also purchase upgrades and membership. they can upload images of their work and even video/audio clips can be added from all the popular services such as youtube, vimeo and soundcloud.

Companies can also register to the website to look for entertainers.

Members are allowed to add each other as friends, communicate through the website and live chat with one another, you can even see when your friends are on-line.

The system includes a banner advertisement system where advertisement slots can be purchased for different prices depending on position and importance of the advert, as well as the ability for multiple adverts to compete for slots on the website.

Unfortunately the website had to be built and live in a very short amount of time, and in fact the site was built within a month which was a mammoth task to achieve since there was so much to complete within that time including design, coding and testing. The resulting website could do with some care and attention but ultimately the client was happy with the result and as such the project was a complete success. 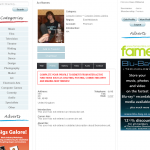 The B' Creative Directory